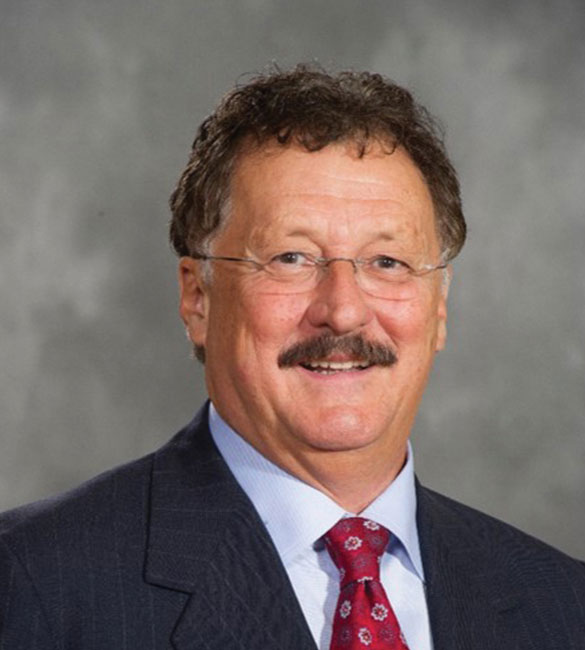 Dr. DiFabio was born and raised in Washington, D.C. and attended the University of Maryland, School of Dentistry (UMSOD) in Baltimore after attending Xavier University in Cincinnati and Gonzaga High School in D.C. Following graduation from UMSOD, he spent two years in the U.S. Army and in a general practice residency. He received an M.S. in Dental Research and Pathology (1979) from the University of Rochester as well as a certificate of completion of a 4 year Oral & Maxillofacial Surgery (OMFS) residency. In 1981 he opened a solo practice of OMFS in Frederick, MD. He continued to serve as a U.S. Army reserve officer, attaining the rank of Major, from1979-1982 where he worked at Walter Reed Army Hospital teaching OMFS and GP Residents. Then, in 1982,
he became a part-time faculty member at UMSOD, teaching juniors, seniors, and OMFS residents (anesthesia and office based OMFS) and currently holds the rank of Associate Clinical Professor in
the Department of OMFS. In 2006, he was asked to provide the lecture series to the Senior Oral Surgery Clerks. He continues today in both the private practice of OMFS and teaching students at UMSOD. He was recently instrumental in establishing a new Dental Clinic in Frederick, MD and was appointed the Medical Director. This new Dental Clinic is a ground-breaking collaboration between the UMSOD and Frederick Memorial Hospital to serve the underinsured, underserved and poor in the Frederick Community. He also donates time each month, teaching OMFS Residents at Nassau County Medical Center in New York.

Dr. DiFabio has practiced the full scope of OMFS for over 35 years. His clinical and didactic passion involves teaching Temporomandibular Joint (TMJ) disorders including the diagnosis, treatment planning, and appropriate surgery. He is an educator, teaching residents and fellow OMFS cadaver courses in cosmetic facial surgery, arthroscopic TMJ surgery and, now in its 4rd year, a Mini Residency in TMJ Surgery. Dr. DiFabio received the OMFS Foundation Practitioner Grant for developing a TMJ 3-D tissue preservation model for teaching anatomy and surgery. He also participated in the AAOMS PBRN 3rd Molar Study. A diplomat of the ABOMS in 1985, he then served on the ABOMS Examination Committee from 2000-2006. He received the AAOMS John F. Freihaut, D.D.S., Outstanding Political Activist Award in 2011. An active reviewer for the JOMS since 2005, he also received the AAOMS award for Reviewer of the Year in 2014 and again in 2015. He was recently appointed as a Consultant to Nexus CMF to help develop a Virtual Reality Simulation Program and Model for TMJ Arthroscopy and Arthroscopic Surgery. He is currently engaged in writing two chapters for publication the first on “The Diagnosis of TMJ Disorders leading to Surgical Treatments” and the second on “The Virtual Reality Simulation of TMJ Diagnosis and Arthroscopic Surgery”.

A keen interest in politics led him to participate in many AAOMS committees related to healthcare and advocacy. He was Chair of both OMSPAC and of the Special Committee on Office Accreditation. He continues to attend many fundraisers with Senators, Congressmen, and Governors to advance the interests of OMFS. He has been active and busy over the years in local and national societies and with various leadership positions including: President of the Frederick County Dental Society and Trustee to the Maryland State Dental Association; President of the Maryland Society of OMFS; Alternate Delegate and Delegate to AAOMS; President of the Middle Atlantic Society of OMFS; Caucus Secretary and Caucus Chair to AAOMS District II and AAOMS District II Trustee; and President of the American Society of TMJ Surgeons. Additionally, he currently serves on the board of directors of three National and State Healthcare Associations.