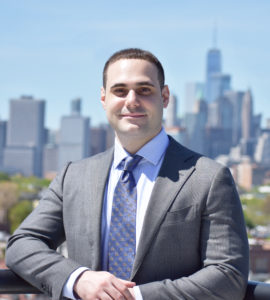 Dr. Nicholas P. Saggese went to Brookdale Hospital Medical Center for his Oral and Maxillofacial Surgery (OMS) residency. His interest in OMS originated at the age of 15 when he began shadowing in private practice and at the Yale-New Haven Hospital.

During OMS residency, Dr. Saggese published articles in the Journal of Oral and Maxillofacial Surgery,British Journal of Oral and Maxillofacial Surgery,and Anesthesia & Analgesia Practice, many of which he was the lead author (View PubMed articles here). Dr. Saggese was awarded first place at the 5th Annual Brookdale Research Day for his poster entitled “Orbit Reconstruction in a Patient with Central Cord Syndrome Using Intraoperative Navigation Technology.” Dr. Saggese is interested in full-scope OMS and undertaking research to advance the field.