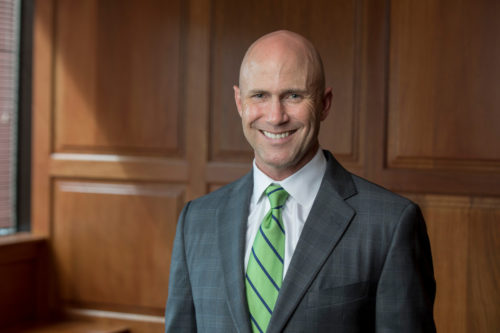 Robert Guldberg, Ph.D. is the vice president and Robert and Leona DeArmond executive director of the Phil and Penny Knight Campus for Accelerating Scientific Impact at the University of Oregon. He holds bachelor’s, master’s, and doctoral degrees in mechanical engineering as well as a master’s degree in bioengineering, all from the University of Michigan. Guldberg also completed a postdoctoral fellowship in molecular biology at Michigan before joining the Georgia Institute of Technology in 1996. At Georgia Tech, Guldberg was a professor of mechanical and biomedical engineering, and served as executive director of the Parker H. Petit Institute for Bioengineering and Bioscience. His research in the areas of regenerative medicine, biomaterials, stem cell therapies, and orthopedic medical devices is currently funded by the NIH, NSF, and DOD and has produced well over 200 publications to date. Over his 20+ year academic career, Dr. Guldberg has served as an advisor and board member for numerous biotechnology companies, patented several technologies, and co-founded four start-ups. At the national level, Dr. Guldberg has held several leadership positions, including President of the Americas Chapter of the Tissue Engineering and Regenerative Medicine International Society (TERMIS-AM).